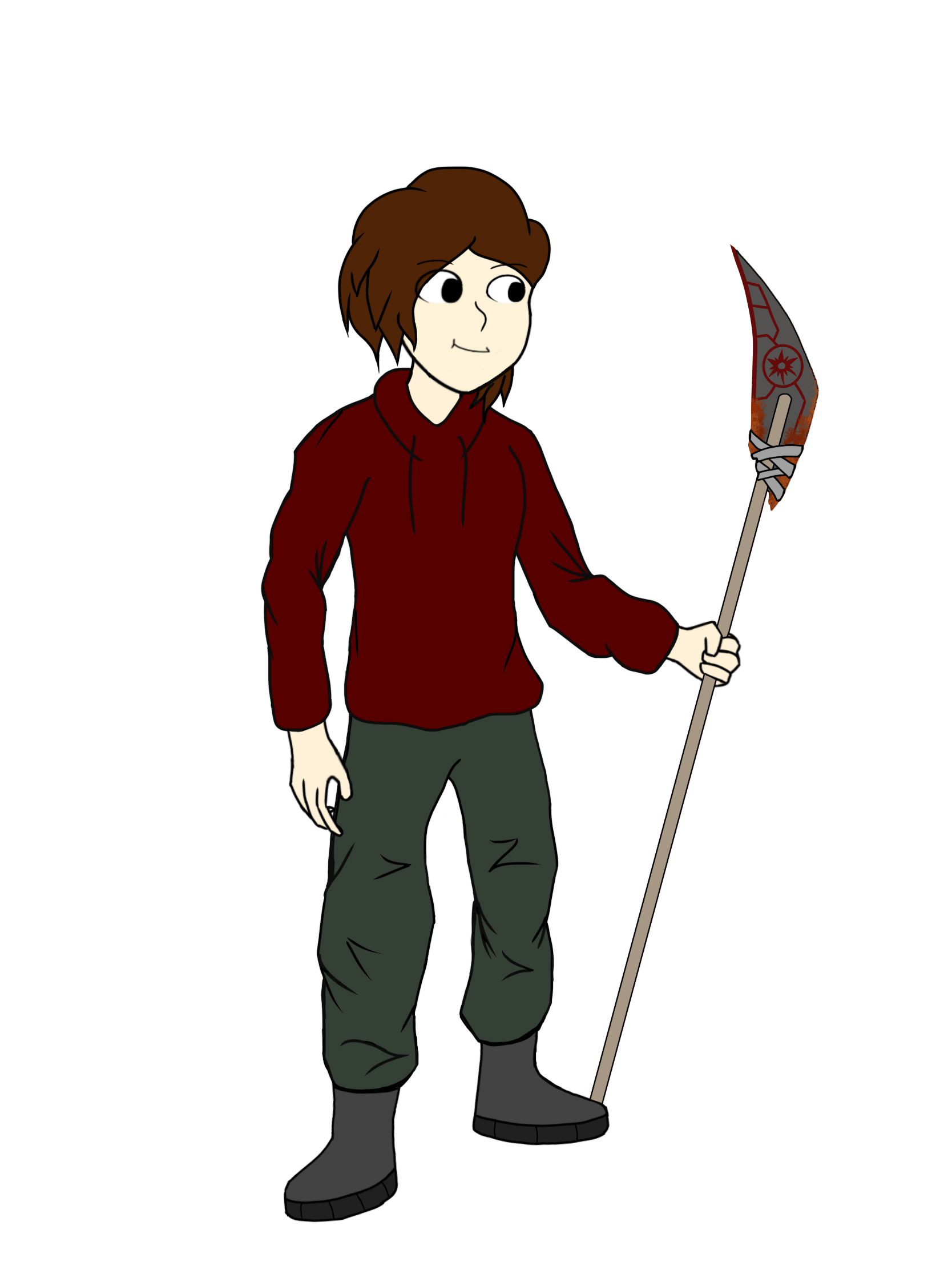 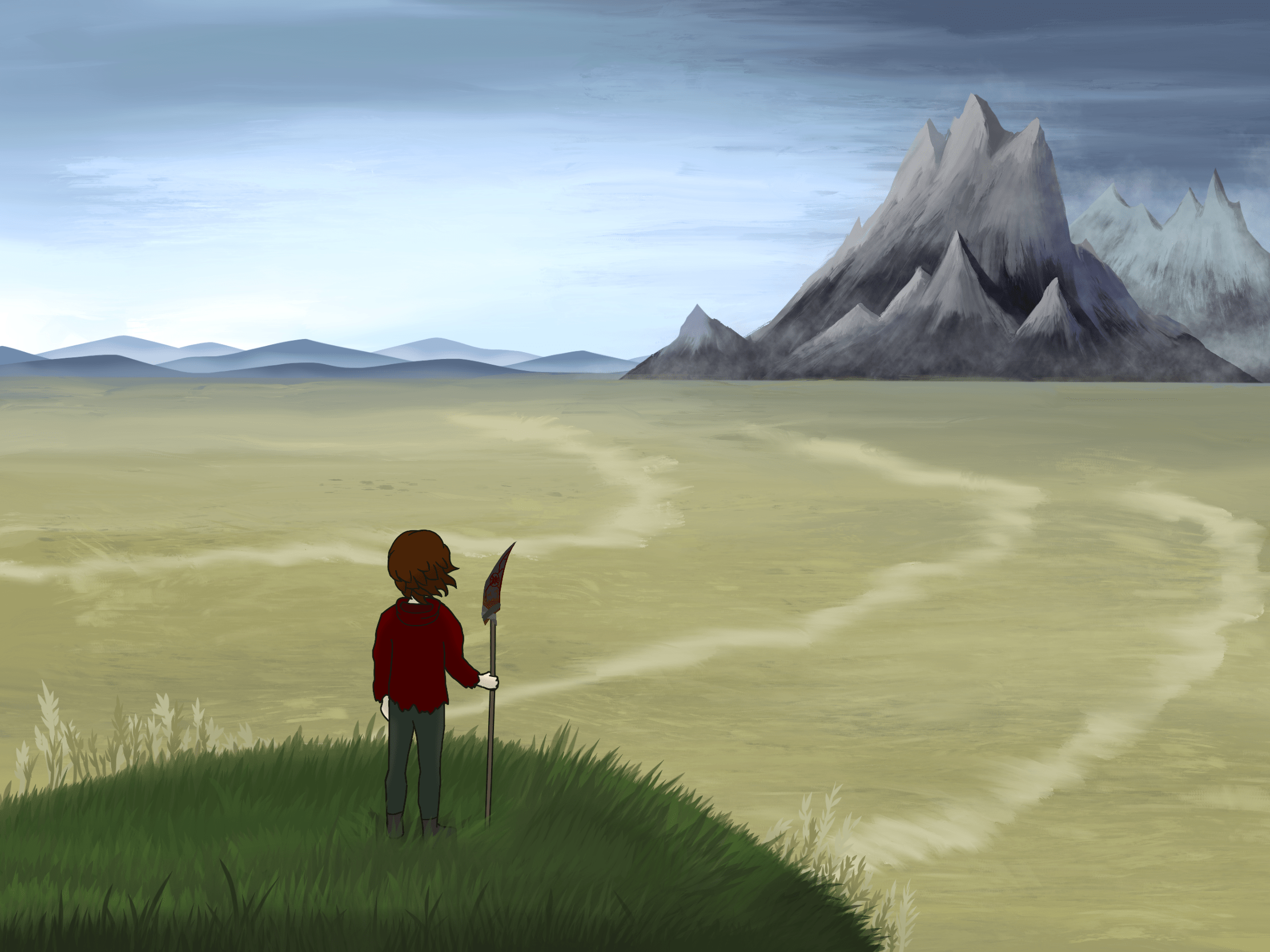 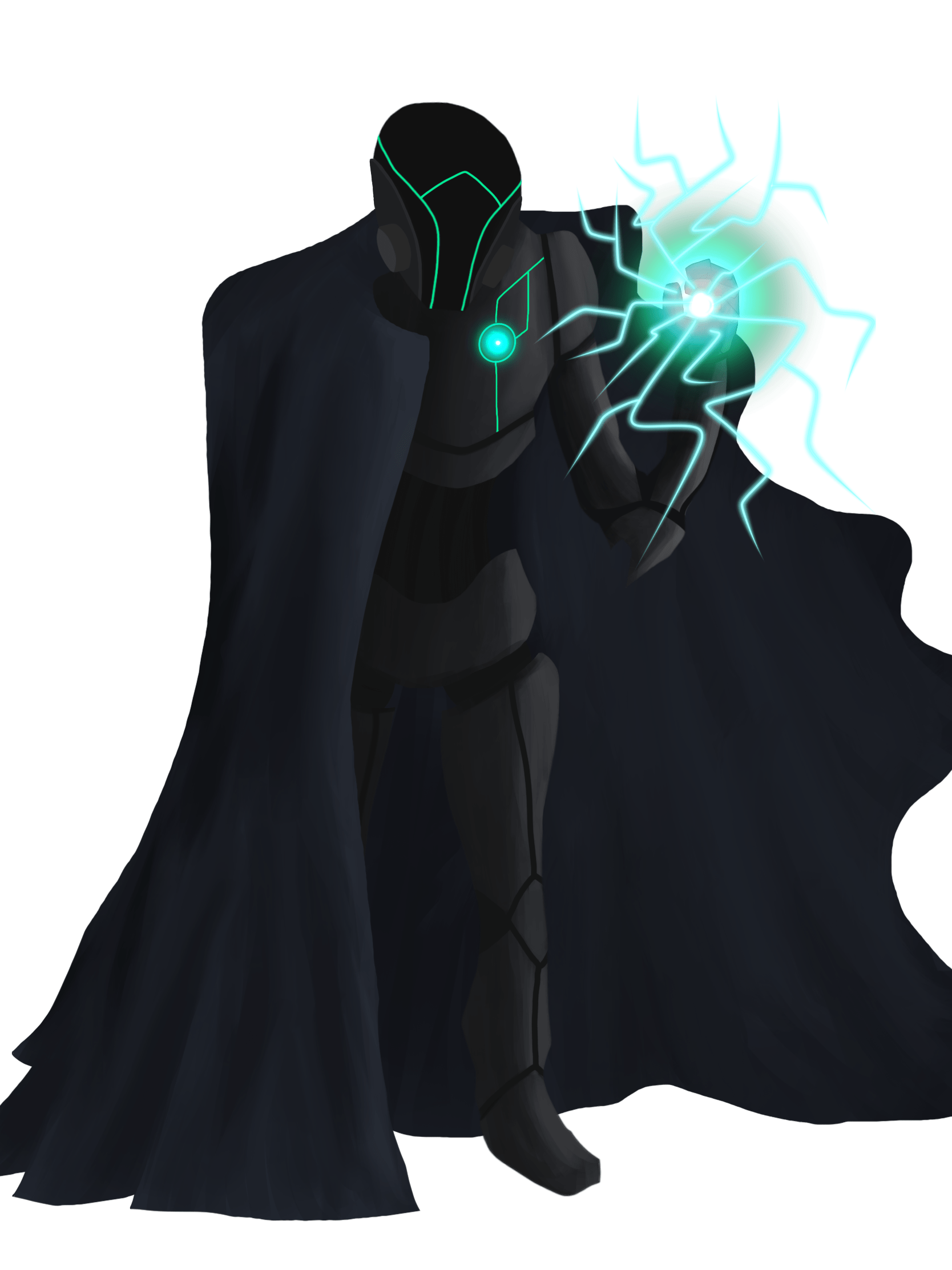 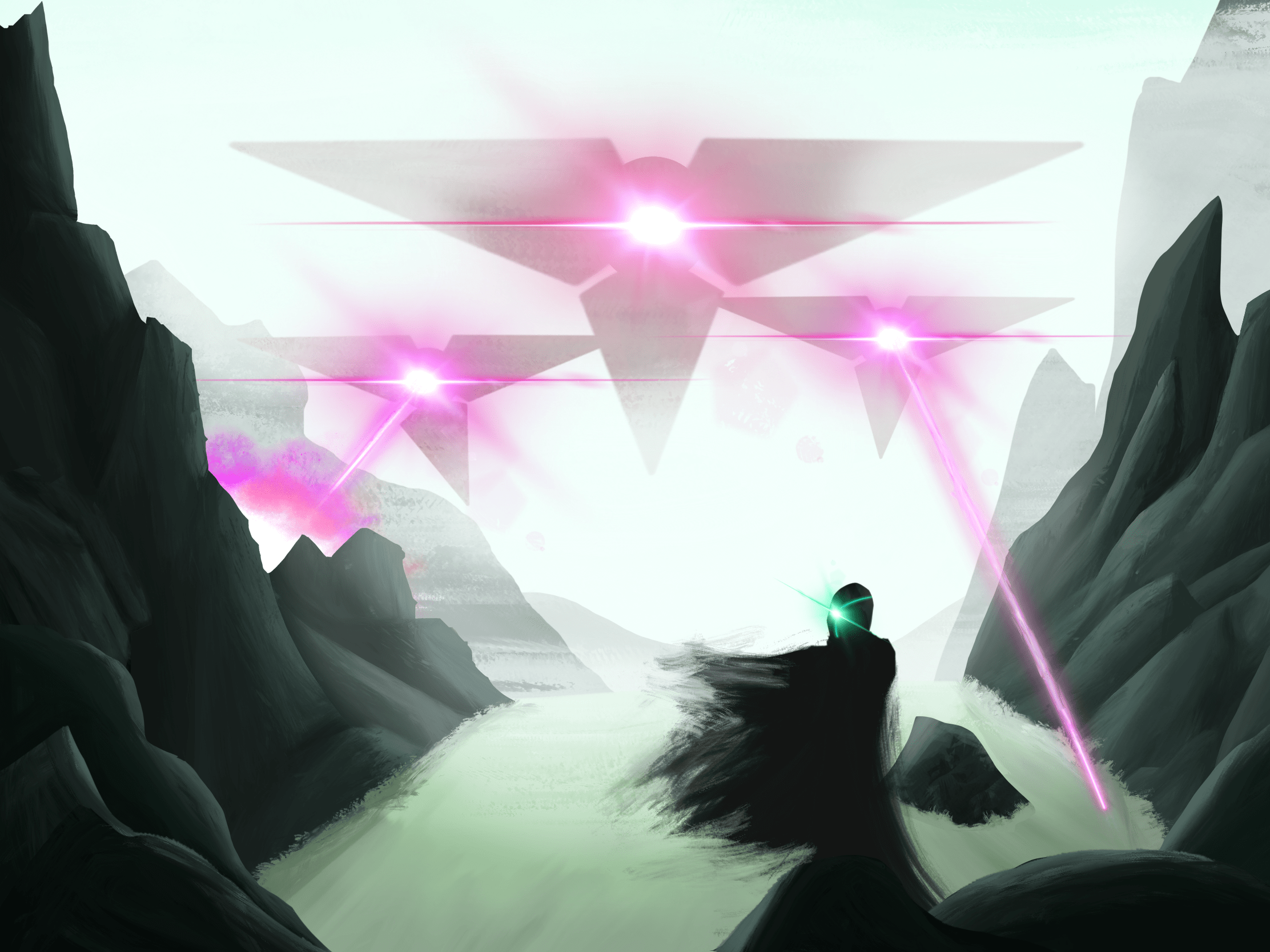 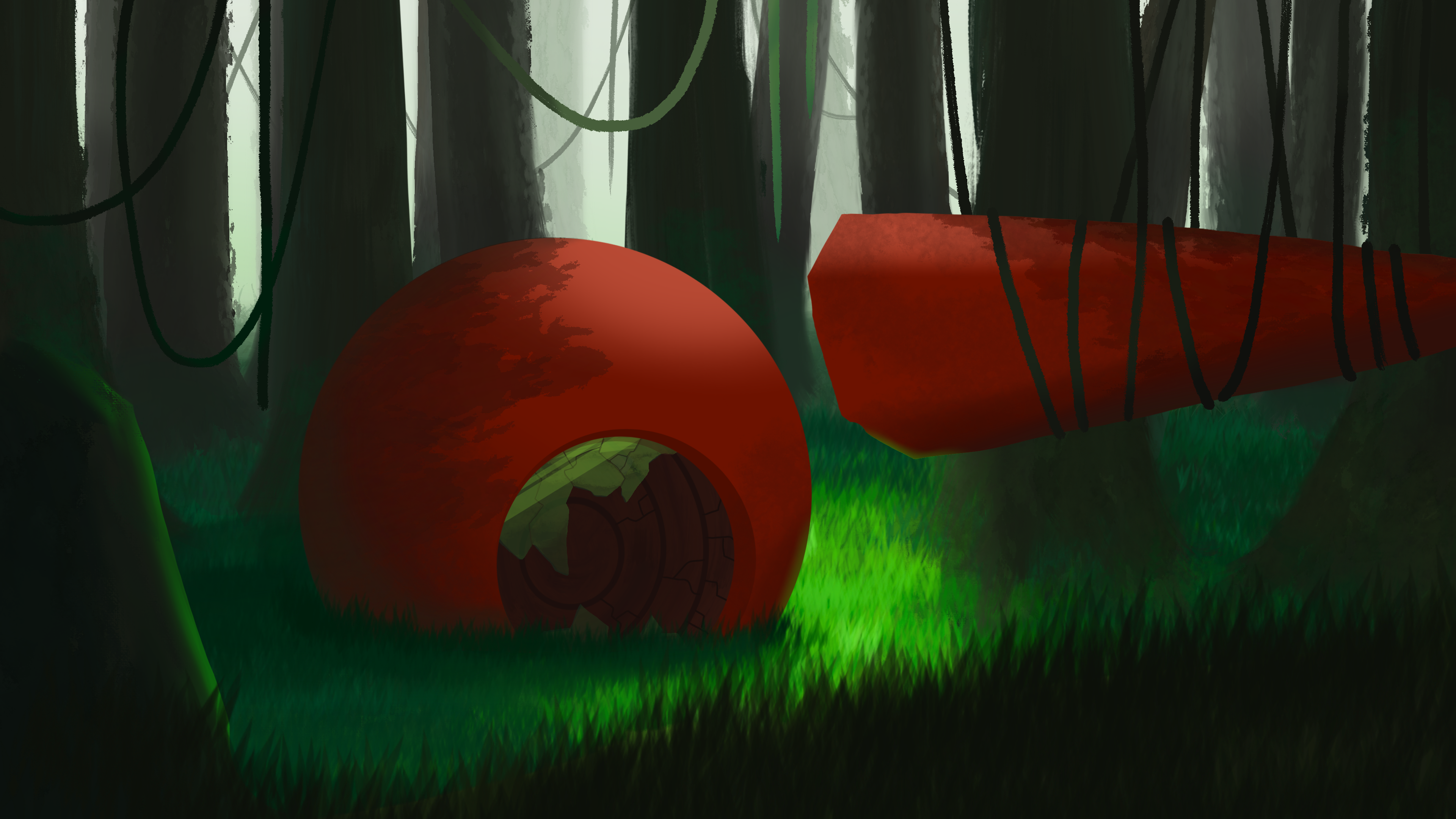 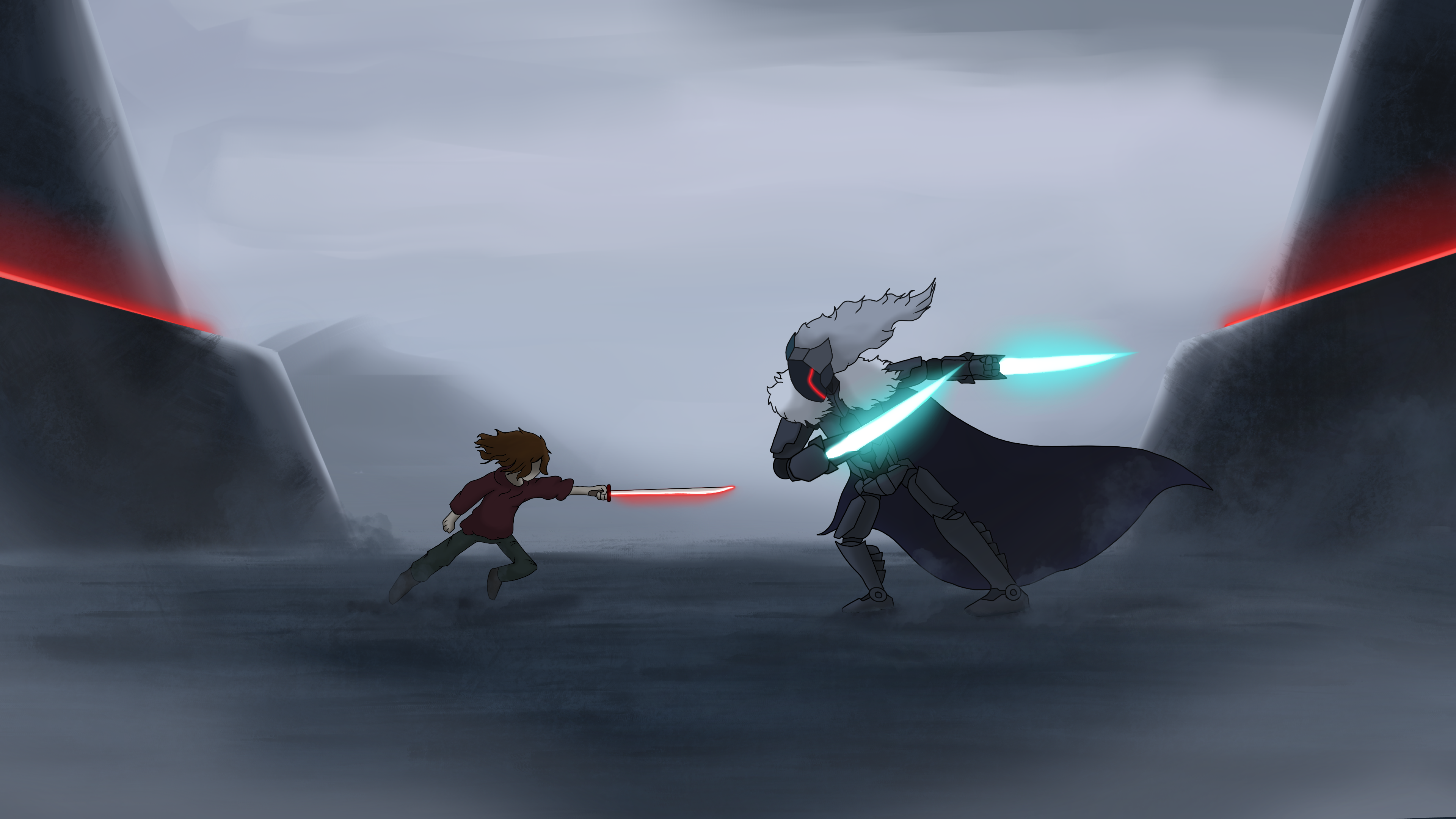 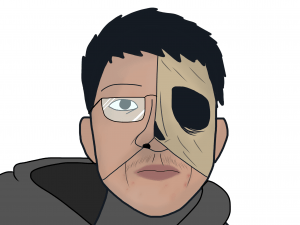 My main goal this year was to improve on my skills in using digital art software, while also building off of my initial story introduced in last year’s portfolio. I also wanted to challenge myself with creating types of art that I lacked experience with, specifically character design. The presence of characters is one of the key aspects of developing a story, and improving my skills at it would help me to expand on my range of techniques. I decided to use the first artwork to test this strategy. Because the main character is the centerpiece of the plot, I thought it would be most appropriate to create a concept for them first. This character ended up being heavily inspired by heroines from modern cartoons I’ve seen, such as Steven Universe, Infinity Train, and Amphibia. Once I had a solid design, I attempted to implement the new character into a concept artwork of a landscape, similar to the works in my previous portfolio. This process was much more challenging than I had anticipated, but I was able to pick up a few skills for shading and texturing grass and mountains.

It was at the second concept art that the theme of past, present, and future had been integrated. This greatly excited me, since I saw this as an opportunity to create artwork focused on the backstory of my plot. Additionally, there was also an opportunity to introduce the main antagonist in a setting that implies the overarching conflict. This character ended up being based on lots of Star Wars, especially Darth Vader and General Grevious. I also planned to reintroduce a design for a minor antagonist first made in my earliest concept artworks. Although character design and implementation went smoothly, my most fatal flaw was that the second project couldn’t retain the theme of past independently. There wasn’t enough in the drawing alone that could indicate a past setting. So I spent some time pondering about how to fix this mistake, before realizing that I could use my later projects to reinforce the past setting.

Before I began the third project, I had doodled a random character that unfortunately served no purpose in the upcoming artworks. It may have come off as derivative at first, but this seamless creativity shows that designing characters have become much easier for me over the months. I took the time to experiment shading on this random character, and I managed to gain some knowledge about shading clothing, which is in my opinion one of the most difficult types of shading to learn. The third project’s purpose was to include elements from the second project while also implying a passage of time, illustrating the transition between past and present. I planned to model it after my first concept art, depicting the previously mentioned “minor antagonists” in a ruined state. During the design process, I tried to gain some experience at using photoshop, specifically to find an efficient method to paint grass easily. This project turned out the best in my opinion, as I had focused my efforts on learning my techniques and skills to improve on my style, rather than the subject of my drawing, and thanks to my practice with shading, I was able to make the concept look far more realistic than any other design.

The final artwork was supposed to represent future, but I had already set my story in a futuristic, post-apocalyptic time. So I chose to center my final project around the future of the story, especially the climax. The scene is supposed to be a final battle between my protagonist and antagonist from the previous projects. Just like how the climax brings the story to a close, this project puts together everything I have made this year. However, I chose to redesign the antagonist this time, specifically because I thought the first iteration was very bland and didn’t reflect the character’s personality well.

This year I gained a lot of skills in both digital arts software and drawing style, and thanks to the theme of past, present, and future, I was also able to create a rough outline of my story through my concepts. The drawings in this portfolio not only shows how the characters progress through my story, but also clearly demonstrate how I progressed as an artist throughout this year. I look forward to next year’s portfolio, where I can hopefully expand on the story further, or even experience a new type of digital art that’s out of my comfort zone.